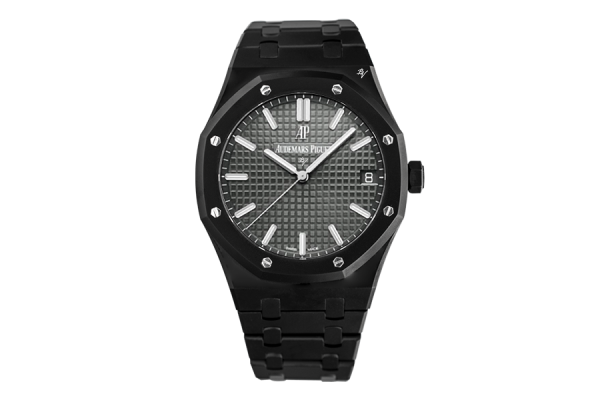 If we were to find a watch capable of drawing a clear line between before and after its launch, it can only have this name: Royal Oak.
Launched by Audemars in 1972 and created by mythical designer Gérald Genta, the Royal Oak initiated a new trend in fine luxury sportsman watchmaking, by which Patek Philippe would later be inspired, creating his Nautilus.
The case shape gets inspiration from the hermetic sealing system of ship portholes. Its beauty has made it a "classic" sports watch, one could wear even with a tuxedo on. Black Venom makes it possible to reach a pinnacle of elegance and sportiness, which can only be matched with a Patek Nautilus, Black Venom. Another feature of Black Venom watches is that they are treated with DLC which is biocompatible. Luxury watches compatible with your skin where there isn't room for allergies and irritations. The total black look gains strength: a perfect mix to feel comfortable with a hypoallergenic, refined and attractive fashionable product.

SHIPPING AND WARRANTY
Accepted payment methods: bank transfer.
Insured shipments through couriers.
Delivery time: 48/72 hours from dispatch.
Shipping via insured courier is free worldwide.
Any customs fees are buyer responsibility.
Tax not refundable. Sorry, Tax free not available.
We accept exchanges.
BLACK VENOM TREATMENT
DLC is the technology "hidden" behind Black Venom. It is a molecular coating with very high potential, developed in the military field and then used with great success in other sectors. Thanks to its composition, it forges a real armor capable of resisting scratches and shocks up to 7-8 times more than steel and 10-12 times more than gold. Unlike treatments such as PVD, it is totally reversible: it does not release any residue and gives an even more magnetic black. A dense, deep black that blends with the leather to create a strikingly elegant contrast. Each watch is individually customized for each customer.
WHAT'S INCLUDED
With Black Venom you don't "just" buy a luxury watch. You purchase its identity, becoming a true luxury rebel that will make you unique and give you the ability to become irresistible. Inside the Black Venom chest you will find: the timepiece with BV treatment a cleaning cloth a screwdriver to disassemble the bracelet 2 summer straps to match the colors of the watch the BV warranty valid for 5 years